Let Me Tell You About My Friend Barry

A few weeks ago I did a podcast episode where I spoke at length about one of my oldest friends Matt Medeiros. I told stories of how we met, growing up together, and reconnecting as adults. I also told the story of what it was like finding out that he had suddenly died. I mentioned on the podcast that feeling of regret of not having one last conversation, no matter how mundane it might have been.  I was happy to have shared so many great memories of Matt, but very sad that he wasn't around to hear it.

In that same episode I spoke about how I had two friends I met at virtually the same time as a young boy. Matt was one, the other was Barry. Today is his birthday and I wanted to share a little about my friend Barry and why he has been one of the greatest positive influences on my life and myself as a person. Will we get a little sentimental? Likely. Will we get a little embarrassing? Oh yeah. But it is so important to me to make sure that all of this is shared now rather than it being too late like it was with Matt.  So let me tell you about my friend Barry.

I first met Barry when I was about 7 years old. His family lived in the same complex as a woman I lovingly referred to as my Aunt despite us not being related by blood. Her name was Esther and she had been as close as blood to my family since long before I was born. I would visit her house and one day I must have seen Barry outside of his family’s house and things went from there. I vaguely remember those days. It was basically like one day I had this new friend and that was now more than 35 years ago.

I usually had a small clique of friends growing up and even through high school. Some would cycle in and out but Barry was always a constant. He has always been one who was almost the straight-man to the craziness I could bring. It was double at times when John was involved. John and I would work extra hard to out ‘crazy’ each other while Barry would probably think to himself ‘How the hell did I end up between these two idiots?’

The thing was, and still is, that Barry was the center for us. He was like a strong silent type basically picking the perfect time to speak, unless he was egging us on to get crazier. I can only speak for myself but he was a very calming presence, almost like Cesar Milan knowing when to reign in wild dogs. I joke about it a little, but it became a much more valuable trait as we all grew up.

I can remember for me personally so many times that Barry was the one to pull me back from the ledge just by being who he is. During bad breakups, bouts of depression, deaths of loved ones, these moments where life felt like it was crumbling around me, Barry was there.

There would be times, especially during and after college ended, where we would go quite a while without seeing each other. Then he would come home from college, or I’d go visit him at school, or later when he lived in Providence, and it would be like time had stood still. 5 minutes in and it was like we were all caught up.

After that would come one of my most favorite memories of life. I don’t know how to sum this up without leaning heavy into the craziness. It usually happened when we’d go out to eat somewhere. We’d be chatting about random stuff and one of us would hit on something stupidly funny and we’d just keep going down that road until we were both gasping for air and in tears laughing. I wish we’d had a tape recorder for those times. Remember the Old Country Buffet story? It had to do with their OC Bee Mascot and who was actually under the big head.

I don’t want to share too many insider secrets about the old days though. There’s 65 hours of old videos from the high school days when I wanted to be a movie director. There are some classic skits we did, some music videos we created. Many of those hours are filled with seemingly mundane, random times sitting at Bass Hole with John laughing about the most random things. Now in my 40’s those are the things I gravitate toward most. I don’t care about the music videos, I’d rather watch and listen to our old conversations at Bass.

When I think of Barry the first word that comes to mind is genuine. He is a true, real, genuine human being. He is a gentle soul but he sticks to his values and beliefs. It is admirable and difficult to do but he pulls it off. Barry has talents I could only dream of. I could speak of music or graphic design but I am speaking of things far more important. I am speaking of being a great husband and a great father. I am far from surprised though.

Barry has this way of making you feel like you’re important and your feelings and opinions matter. That was what always has made it easy to pull back the curtain and talk with him about some of my worst moments in life. I know that he won’t judge and will always have my back, even if I am at fault for the mistakes. That’s a true friend.

It has been an honor and privilege to call Barry my friend for so long. I hope that anyone reading this has a friend that means to you what he has meant to me. I tried my best to not make this too long, too embarrassing, or too random, but it’s tough when trying to sum up more than 3 decades of knowing someone.

So let me conclude this by wishing Barry a Happy Birthday. I love you like a brother and you have meant more to me and my life than you could possibly imagine. Thank you for being there when I needed it most. Thank you for being who you are. If there were more people like you this world would be such a better place. 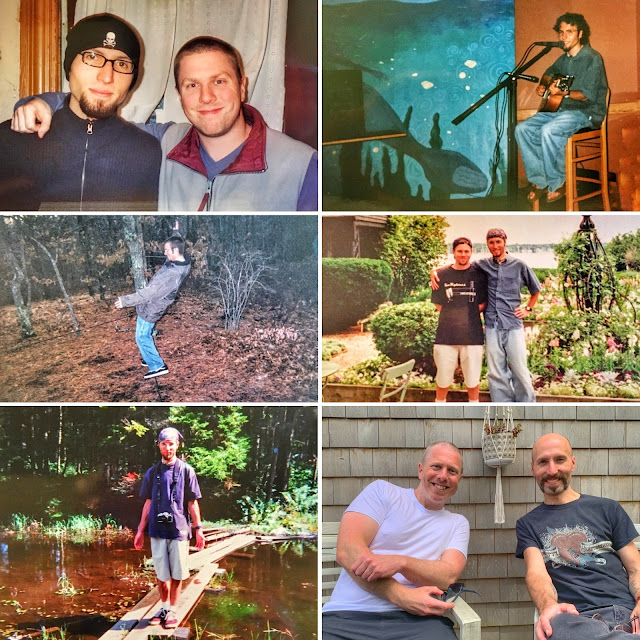 Posted by Christopher Setterlund at 5:31 PM