The last of the Irish donut makers.


Sullivan’s was a staple of downtown Hyannis for two decades in the times before Dunkin’ Donuts resided on nearly every street corner on Cape Cod. After successfully running three other doughnut shops in Brockton in the 1950s and ’60s, John “Sully” Sullivan was making doughnuts at a Dunkin’ Donuts in Stoughton, Massachusetts, in 1971, when he was hired by James Despotopulos to work at his Sugar N’ Spice doughnut shop in South Yarmouth. Despotopulos had opened his shop in 1969 after moving to Cape Cod from Stoughton. 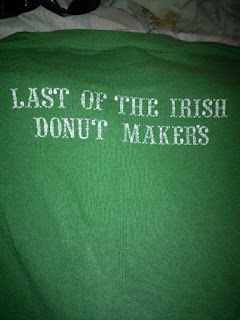 Sully was seen as the unofficial mayor of Brockton, rubbing elbows with the likes of Cesar Romero and his close friend Rocky Marciano. Never the less he moved his wife, Rosemarie, and their five children to the mid-Cape area. There he hoped to settle into a quieter routine, escaping the busier and sometimes dangerous streets of Brockton in the early 1970s.

Not too long after Sullivan left Sugar N’ Spice, he worked at a Dunkin’ Donuts on the corner of Forest Road and Route 28 in South Yarmouth that still stands as of 2019. Doughnut making was a passion of Sully’s; it also ran in the family. Sullivan’s father, also named John Sullivan, had run a doughnut shop in Hampton Beach, New Hampshire, before World War II. It was not long before Sullivan’s Donut Shop lived again, this time on the corner of Bearse’s Way and Route 28 in Hyannis. After purchasing equipment from a closing Jack In the Box fast food restaurant the new shop opened in late 1975 and gained popularity from the get-go.

These doughnuts were made the old-fashioned way in large vats of oil, with bakers using sticks to flip the sweet lumps of dough and make sure they were properly cooked on each side. These doughnuts were heavier and more filling and satisfying. They came in all sorts of delicious shapes and sizes. There were classic honey-dipped, chocolate frosted and jelly-filled; there were crullers, coffee rolls and doughnut holes. There were also delectable muffins and coffee, of course.

Though it opened very early for people on their way to work, some could not wait until sunrise for a fresh and hot doughnut. Sully would open his back door before officially opening for the day and sell doughnuts to customers. This practice has been made well-known thanks to Back Door Donuts, located in Oak Bluffs on Martha’s Vineyard. This is part of the Martha’s Vineyard Gourmet Café & Bakery, which opened in 2001.

However, there was much more than just the run of the mill doughnut shop lying in those four walls. Sullivan’s was a meeting place before there was Starbucks, and it was every bit a family-run business. Sully’s wife, sons and daughters all worked hard to make each and every customer feel welcome. In return, the customers made Sullivan’s a destination. There were also times that the customers were the staff. A handful of regulars knew how to open the shop, and once the doors were unlocked, they would happily help with the setup, pulling down stools and starting the coffee.

There were several unique touches to Sullivan’s that made it more than just coffee and doughnuts. For starters, there was a piano located in the corner of the shop; no other Cape Cod doughnut shop could lay claim to that. Said piano would be played daily by the house piano player, Barnstable High School English teacher Ed Milk. It was also played by legendary jazz pianist Dave McKenna. Considered to be one of the finest pianists in the world during his career,    McKenna, also a neighbor of Sully’s, would often play music to the delight of customers and to pay for his doughnuts.

After moving to Cape Cod in 1966, McKenna played many shows at local bars and nightclubs. Sully remarked that he would often go into work at the doughnut shop at 1:00 a.m. This was around the time that most of the local bars would close, and the musicians, including McKenna, who had been playing would come knocking on the door looking for something to eat. Legend has it that McKenna once ate eighteen hot honey-dipped doughnuts in one sitting but stopped there; telling Sully he “didn’t want to seem like a pig.”

Also unique to Sullivan’s was the meticulous, hand-painted mural of the mid-Cape area on the wall of the shop. It was common for customers to walk over to the mural, coffee or doughnut in hand, and stare in wonder at the painstaking detail put into this piece of art.

Sullivan’s popularity stretched beyond the average joes who stopped in before work. Legendary Boston Bruins announcer Fred Cusick enjoyed popping in for a visit when he was around during the 1970s and ’80s.

Longtime Kennedy chauffeur Tommy Roderick also frequented the donut shop, picking up a box because “Jackie loved blueberry muffins.” So popular was Sullivan’s that Barnstable Police remarked to Sully that if they were ever looking for a suspect in Hyannis they would simply stake out Sullivan’s and neighboring Christy’s, because whomever they were looking for would end up there eventually.

Sullivan’s thrived into the 1990s, when construction at the plaza where it resided caused the shop to be closed for a while. It had been featured on the corner of the plaza with glass windows facing the traffic; now it had been pushed inside to a smaller location. Unfortunately, business suffered, and Sullivan’s closed early in 1993.

Much of the equipment used to make the doughnuts at Sullivan’s was bought by the Hole In One Donut Shop. This company, run by four sisters, continues to make doughnuts the old-fashioned way to this day, even in a world filled with Dunkin’ Donuts and Krispy Kreme. They are still going strong as of 2019, with locations in Eastham and Orleans.

As of this writing, a convenience store sits where Sullivan’s once resided.


Posted by Christopher Setterlund at 3:23 PM