In present time when one thinks of nightlife it inevitably comes down to one of two things, a nightclub or a bar. However in years past many more events were considered part of the nightlife scene. This was most certainly the case with the Rainbow Ballroom. This unique hot spot was not big on alcohol however it routinely drew many hundreds of locals and visitors inside its walls to partake in good fun after dinner and after sunset.
The story of this legendary establishment goes back to the Roaring Twenties when Ernie Baker and his Novelty Orchestra was making a name for himself all across Southeastern Massachusetts. Baker, a well known local in Yarmouth, would often set up gigs for his orchestra at the Mill Hill Pavilion, a popular live entertainment spot located in West Yarmouth. As the 1920’s went on Baker had a plan to create a more permanent home for his musical group.
In June 1930 Baker purchased six lots of land located opposite the Mill Hill Tavern. It was upon this land that he planned to build his very own dance hall to house his Novelty Orchestra. The work on the building was swift and it was ready for its debut within weeks. The dance floor was remarked as the largest east of New Bedford. The interior was decked out in pastel colors with white being the main shade, including a white stage and a pristine and unique white piano adorned with painted flowers. A contest would be held, with more than a thousand entries, to name the new dance hall. The winning name was the Rainbow Ballroom, the winning entry received $20 and two season passes to the establishment. 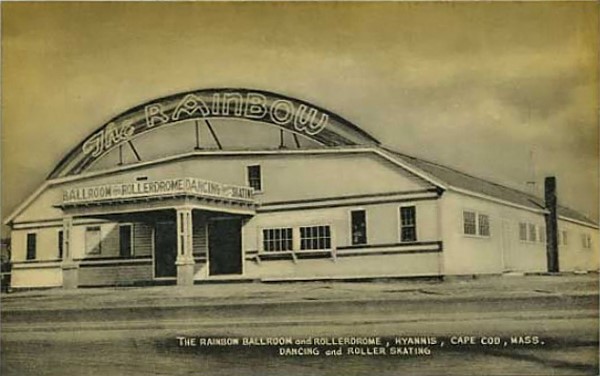 Opening night for the Rainbow Ballroom was Wednesday August 13, 1930. The crowd was so large that the enormous dance floor was packed cheek to cheek all night. It was a state of the art hot spot with the newest in electric lighting allowing for the lights hitting the dance floor to be changed to a variety of colors. The womens’ dressing rooms even including electric curling irons. Two orchestras would keep the music playing all night, the debut of Ernie Baker’s Rainbow Room was a rousing success.
From the start Baker maintain a high profile for himself as well as his club. There would be themed dances such as a Thanksgiving Puritan Ball and a Miss Cape Cod contest held on New Year’s Eve 1930. Miss Gilbery Kelley of Hyannis Port would be crowned the winner out of 250 entrants, receiving a silver cup. Baker would also continue to play gigs across the Cape and Southeastern Massachusetts with his orchestra, undoubtedly enticing more to come and visit the Rainbow. 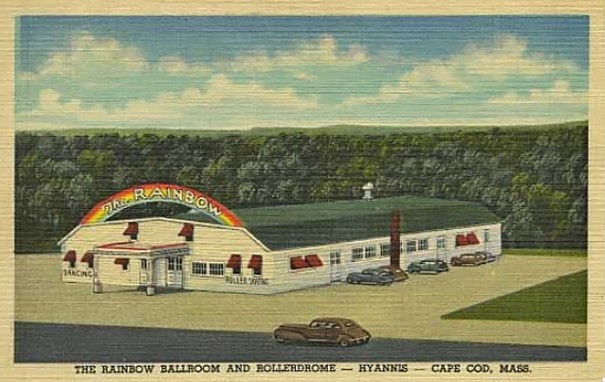 Baker would up his game in 1931 by adding amateur basketball in the form of the Hyannis Wanderers. Teams from all over the state would come to play them. Typically the games were held on Wednesdays during the season, with dancing happening both before and after. Ahead of his time in marketing Baker would also give away a Sport Model Chevy automobile which he had been using for advertising the Rainbow in January 1932. His nightspot was gaining and maintaining its popularity through many different avenues. The following year even more would be added.
The Rainbow Ballroom would begin throwing midnight dances, typically running from midnight to 3am, they would be occasional occurrences which kept them as must attend events. Later in 1933 Baker would experiment with a new activity, rollerskating. This would become such a hit that it would take place three times a week, drawing many new faces. Baker would even rent out use of his building to others for charitable events and the like. 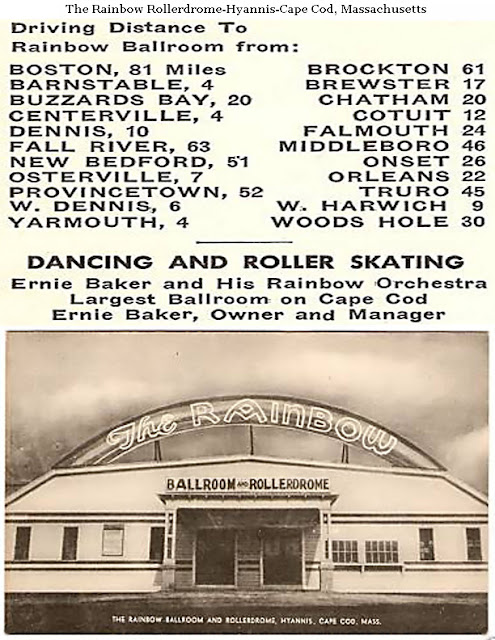 Word of mouth and positive experiences began to spread. In 1936 Chick Webb and his NBC Orchestra would make an appearance at the Rainbow being fronted by the one and only Ella Fitzgerald. It was during this year that boxing would debut to add to the already popular Hyannis All-Stars wrestling bouts which took place there. In 1938 Baker and his Rainbow Ballroom would see their greatest exposure as they would routinely be promoted on the national Old-Fashioned Cafe radio program. Show host Ken Singer had been playing at the neighboring Old Mill Tavern and began to frequent Ernie Baker’s popular establishment.
Despite housing rollerskating, basketball, boxing, and wrestling, the Rainbow would remain true to what its first event was, dancing. Throughout the 1940’s and 1950’s there would be themed dances, midnight dances, holiday party dances, charitable balls, and more. Ernie Baker knew what his customers wanted and gave it to them. Long after the Old Mill Tavern had gone out of business, replaced by the Mill Hill Club, Ernie Baker’s Rainbow Room was still going strong.
By the mid-1960’s, after around thirty-five years of ownership, Ernie Baker closed his Rainbow Room and took a well-deserved retirement. The building itself would remain dormant for several years before being sold in 1970. In the more than four decades since the familiar shell of the building has remained, housing such businesses as Quoddy Moccasins Shoe Factory Outlet, French Shriner Shoes, Clancy’s Restaurant, Reebok Outlet, and most recently a Salvation Army store.
However no matter what business resides on the property it will always be fondly remember by longtime Cape Codders as Ernie Baker’s Rainbow Room. It was a unique nightspot which relied on dancing, rollerskating, basketball, boxing, and wrestling everything but the alcohol to claim its spot as a forefather of the golden age of Cape Cod nightlife.
Despite not being known for cocktails, if one had frequented the Rainbow Ballroom during its heyday of the 1940’s for some dancing perhaps they would have made a drink afterwards at home such as the popular French 75.
French 75
- 3 oz Champagne
- 1 oz gin
- 1/2 oz fresh lemon juice
- 1/2 oz simple syrup
Preparation: Add all of the ingredients except the Champagne into a shaker with ice and shake well. Strain into a Champagne flute. Top with the Champagne and garnish with a lemon twist.
------------------------------------------
My 5th book, Cape Cod Nights, is on sale at Amazon.com and through Arcadia Publishing

Posted by Christopher Setterlund at 7:55 AM