In My Footsteps: Trip 7: Cape Cod Canal - Mainland Side


The Cape Cod Canal has too much to offer for one article to hold. This article deals with what lies across the bridges on the off-Cape side of the Canal. I decided to cross the Canal at the Bourne Bridge as it was closest to where I finished up on the Cape side. To cross the bridge follow Shore Road back to Trowbridge Road and round the rotary. The Bourne Bridge is nearly 1,000 feet longer than the Sagamore Bridge and sits 135-feet above the Canal.

Once across the bridge take the first exit off of the highway which remains Route 28. Follow it to the right and it will lead you through Buzzards Bay. After a few miles a left onto Canal Street will bring you face to face with the Railroad Bridge again. The Buzzards Bay Depot train station is a wonderful reminder of a simpler time. Dinner trains depart from this location Friday nights during the summer. Family supper trains depart on Monday evenings during the summer as well.

The next street over from the train station, Academy Drive, leads to the Massachusetts Maritime Academy. Established in 1891 it is the second oldest state maritime academy in the country. The campus is open to the public with visitor’s guides available at the campus or online. A 242-foot wind turbine sits on campus and is an imposing sight. On the way back down toward Route 28 on the left sits the Taylor Point Marina. A gas station for boats sits at the end of one of the docks complete with pumps and prices on top of said pumps. It was something I have not seen before. 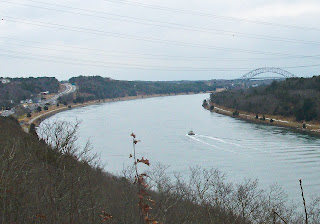 Route 28 turns to the Route 6 Scenic Highway as you pass the Bourne Bridge and travel parallel to the Canal. On this mainland side of the Canal there are much better views. The overlook areas on the Cape side are far too small and come up on you much too quickly to really have a chance to stop and enjoy them. The mainland side sports two smaller rest areas and one larger spot complete with an information building. It is here that another hidden treasure of the Canal area is discovered.

The tiny village of Bournedale is home to a lovely herring run that travels underneath the highway and flows out into the Canal. In the spring the herring run is filled with the spawning fish, but taking of the fish is prohibited until further notice. It is look but don’t touch! The herring run leads to a surprising set of nature trails nestled in between the bustling Route 6 and Cape Cod Canal. 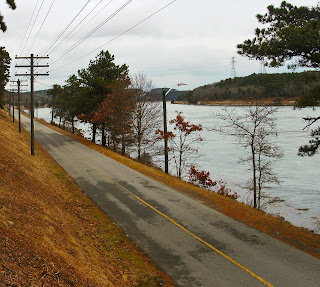 The Bournedale Hills trails take you through the woods and glacial boulders and lead you eventually to the Bourne Scenic Park at the feet of the bridge. Though the rushing of the highway traffic and the passing boats never fully fades there are points during this hilly hike that you will forget just what lies within a few hundred feet on either side. If you do not wish to take the full hike to the scenic park there are several opportunities to take stairs down to the bike path(right) which runs along the length of the Canal. This can be followed back to the parking area.

Route 6’s Scenic Highway ends up at the new Sagamore Flyover. Once congested by traffic thanks to a rotary at the foot of the Sagamore Bridge this section of roads is a much smoother ride. The area just to the east of the bridge has a few restaurants and lots of parking. It is a perfect spot to grab lunch after a long day of sightseeing.

For many this would end the trip along the Canal, but there is one more place that needs to be seen. The Scenic Highway if followed east becomes Scusset Beach Road. This will take you to the Cape Cod Bay end of the Canal and the long jetty that marks its end. Scusset Beach Road is about three miles long and leads you through a remote section of forest which makes up the Scussett Beach State Reservation. Here there are places to camp as well as the ending of the Canal bike path. 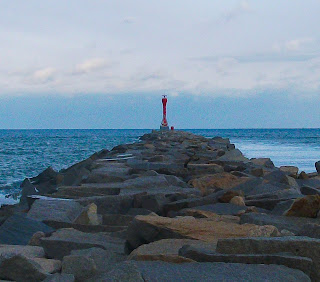 The jetty marking the end of the Canal is equipped with a breakwater light, red in color, which helps to guide ships safely into the Canal at night(right). There is a magnificent view of Plymouth and the giant white sandy cliffs running along the shore. Before leaving the Scusset Beach State Reservation there is one last place that must be seen and that is the Sagamore Hill Historic Site.

There is a parking lot directly across from the trails that are large enough for vehicles. The trail, about ¾ of a mile in length is easy to navigate and leads you up to a spot that was once a Native American meeting ground and later a World War II coastal fortification. The site possesses a great view of the homes along Sagamore and Scusset Beach as well as the White Cliffs in Plymouth(below). 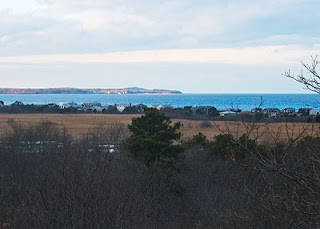 After seeing one end of the Canal to the other from both sides it is still amazing to me that this waterway was totally man made and done in a time where technology was very primitive. That information makes the scope of this trip even more astonishing. So it doesn’t matter from which side you begin or end just start driving along this miracle of man; you will not be disappointed. Have fun and happy traveling!


Directions: Mass Maritime Academy: from Bourne Bridge take first exit. Turn right onto Rt. 28, follow it for a few miles. Turn left onto Academy Drive, Taylor Point Marina should be on your right as well.

Bournedale Hills Trails: Follow Rt. 28 east under Bourne Bridge, it becomes Scenic Highway. Continue on Scenic Highway for a few miles, the rest area where the trails are is designated by a sign. It is directly across from the Herring Run Motel.

Bourne on Dwellable
Posted by Christopher Setterlund at 6:02 PM