In My Footsteps: Trip 6: Cape Cod Canal - Cape Side

With so many destinations on the map when it comes to visiting Cape Cod, there are some very obvious ones that tend to get overlooked. One such place is seen by every single person who ever visits the Cape: the Cape Cod Canal. Stretching just over seventeen miles in length from Cape Cod Bay to Buzzards Bay and crossed by three bridges the Canal is a man made miracle that gets lost sometimes in the allure of the many beautiful beaches and shops of the Cape. This article is going to be all about the Canal and what there is to see along its shores. Being far too long it will be divided into an on Cape article and an off Cape article. 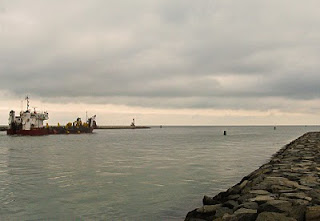 I began at the mouth of the Canal on the east side which empties into Cape Cod Bay. After a short walk across a very rocky beach I was lucky enough to arrive at the edge of the Canal just in time to watch a large ship from the Great Lakes area pass through and head out into the bay(left). At a maximum width of 540-feet the Canal sees over 20,000 ships pass through its waters annually.

Located a few hundred yards from the bay end of the Canal is a Power Plant owned and run by the Atlanta-based energy company, Mirant. A trail way leads from the mouth of the Canal back toward one of the visitor’s centers. Directly across from the visitor’s center is the Coast Guard station as they, along with many fishermen, operate out of the small harbor at the Sandwich Marina.
Route 6A is the best way to follow the Canal. There is a service road for authorized vehicles and bike trails running along either side of the waterway but most of the sights along the Canal can be driven to without a problem. Traveling along 6A, the first major sight is that of the Sagamore Bridge. Opened in 1935 and spanning 1,408 feet across the Canal, this bridge is the way to get onto the Cape from Boston and points north as it continues seamlessly from Route 3 to Route 6. The ‘Sagamore Flyover’ project, completed in 2006 replaced a rotary that caused traffic to become severely congested with an easier to navigate system of roads. 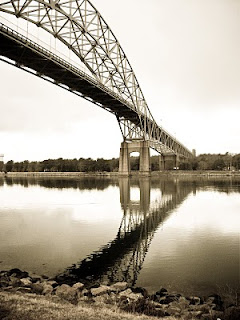 Route 6A becomes Sandwich Road during its run along the Canal. Just before the Bourne Bridge rotary comes into sight Sandwich Road bears right. Follow this road and you will find yourself stepping into a hidden piece of Cape Cod, and United States history. Sandwich Road travels along a more secluded section of the Canal, passing directly under the Bourne Bridge(right). Unlike with the Sagamore Bridge there is a designated recreation area next to the bridge allowing visitors to park. People can get out and walk along the Canal while listening to the rush of highway traffic passing overhead. It is a soothing sort of hum. There are active railroad tracks which also pass along the Canal and they should be watched in case of trains. The bike path can be used to walk on and on warmer days it is highly recommended and highly populated by bicyclists, runners, and skaters.
Sandwich Road continues and it is along here that the visit to the Canal takes on a more historic twist. After passing by the Jonathan Bourne Library a right hand turn down Perry Avenue will lead you to the Aptucxet Trading Post museum. Built in 1627 it was the first trading post used by the fledgling Plymouth Colony. The building that stands is a replica of the original, but the museum houses excavated pieces of the nearly 400-year old building inside. Not to be missed as well sitting less than a hundred feet from the Aptucxet Trading Post museum is the Gray Gables railroad station. It was created for President Grover Cleveland whose summer home in Bourne was named Gray Gables. The building was moved to the Aptucxet grounds in 1976. 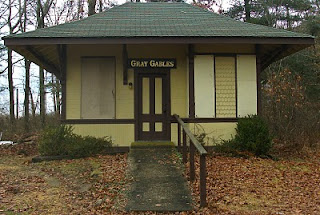 Aptucxet Road leads to Shore Road via a surprisingly beautifully painted overpass. Turn right and follow Shore Road to Bell Road and the third and final bridge along the Canal. The railroad bridge, built in 1935 and crossing the Canal near Buzzards Bay, was the largest vertical lift bridge in history when it was originally built. It is still right up there today. When raised it has a clearance of 135-feet. Near the Buzzards Bay end of the Canal sits a small cove where on this day hundreds upon hundreds of ducks and other water fowl congregated. No trains passed during my stop here but watching the railroad bridge(below) move is a spectacular sight to see. 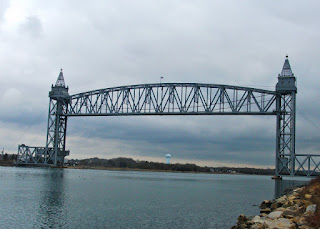 Not to be lost in all of the sights and activities along the Cape side of the Canal is the fact that the entire waterway was man made. It is amazing to think of how technology was different when the project began nearly one hundred years ago. That information makes the whole scope of the trip even more remarkable. Stay tuned for the second part of this article focusing on the off-Cape side of the Canal. Have fun and happy traveling!

Sagamore Beach on Dwellable
Posted by Christopher Setterlund at 12:57 PM

I've been hearing a lot about Cape Cod from my friends as I was searching for the best marinas in Massachusetts. Now the cape will be one of my other choice aside from the South Shore.

As soon as I settle with a Massachusetts marina, I'll check the Cape Cod canal.