Massachusetts being one of the thirteen original colonies is a state rich in history. Every town in the state has its own list of historical places to visit. There are so many places in fact that it is possible to visit any of Massachusetts towns several times and still miss some amazing historical places. There are three mentioned here today that are must see, but they are by no means the last I will seek out.

Located only a half hour from the Bourne Bridge, New Bedford is overflowing with historical places. Deep in the tradition of the sea the New Bedford Whaling Museum, established in 1907, is normally the first spot circled on any itinerary as well it should be. The cobblestone streets and old-time looking shops in the surrounding area make it feel as though you have traveled back to another time. After visiting the museum there are many other places just as rich in significance in New Bedford. One such place is located at the end of Rodney French Boulevard on Clarks Point along Buzzards Bay. 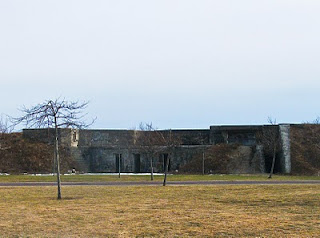 Fort Taber is a living breathing artifact. It is two buildings, an earthen fort and granite fort side by side along the breezy shores. The earthen fort(left) was built during the Civil War in 1861. It was built first as Governor John Andrew and Mayor Issac Taber could not wait for state or federal aid to help build the granite fort at the dawning of the Civil War. 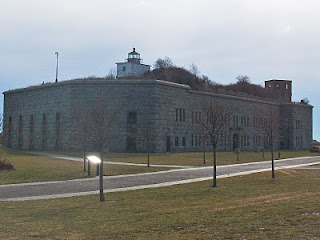 The much larger, granite structure(right) next to the earthen fort was started shortly thereafter; the United States War Department stopped construction in 1871. It was locally finished in 1898 and named Fort Rodman after Civil War Lt. Col. Logan Rodman of New Bedford. The Clark’s Point Lighthouse, which once stood alongside the granite structure, was placed on the second tier of the fort and is easily visible today. Despite being two different buildings with two different names, the area is usually mistakenly simply called Fort Taber. The granite fort is kept under lock and key but the earthen fort can be entered, though beware as vandals have sprayed graffiti inside and littered as well. If you take a step back and close your eyes you can imagine the soldiers training on this spot more than a hundred years ago. 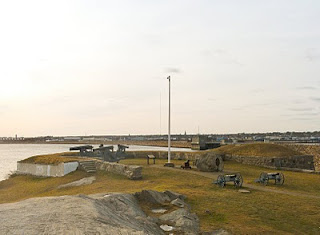 Only five miles north of Fort Taber is an even older piece of American history. Located along the water in Fairhaven, and within sight of Fort Taber is Fort Phoenix. This spot was built during the American Revolution in 1775. It was destroyed by British troops in 1778 but was rebuilt so quickly that it was given the name Fort Phoenix(right) after the mythical bird. In 1812 it was enlarged under the supervision of the future ‘Father of the Military Academy’ at West Point, Sylvanua Thayer. It helped repel an attack by the British HMS Nimrod in 1814. It remained in use during the Civil War with Union troops rotating between Fort Phoenix and Fort Taber. Though not used since 1876, Fort Phoenix still bears the look of an active military institution with five 19th century cannons perched facing over the waters of Buzzards Bay as if ready for an oncoming battle. The site is open year round and has a tremendous breakwater walk with a view of Palmer’s Island Light located on a small island in the middle of the harbor. 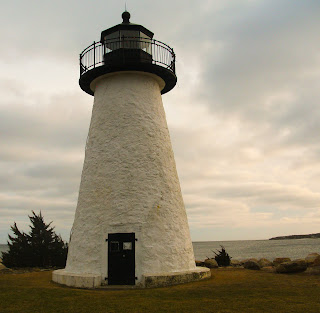 About seven miles east, in the small town of Mattapoisett, there is yet another piece of history. On the shore of Buzzards Bay, at the mouth of Mattapoisett’s harbor, sits Ned’s Point Lighthouse(left). It was built in 1838 at the urging of former President, and at that time Massachusetts Congressman, John Quincy Adams. It had been rushed and poorly built at first, needing several rounds of improvements up through 1888. The wooden light keeper’s house was loaded on a barge and floated across Buzzards Bay to Wing’s Neck Light in Bourne in 1923. Russell Eastman, the last keeper at Ned’s Point, rode in the house across the bay on the day. Decommissioned by the Coast Guard in 1952 the light became active again in 1961. The thirty-nine foot stone tower is open for a few hours Thursdays during July and August but the grounds are open all year long.

Massachusetts is filled with history that dates back nearly 400 years. It is impossible to visit any of the 351 cities and towns in the state and not find one if not several amazing historical landmarks. You don’t even have to enjoy history to appreciate these sites mentioned above. It is much different than studying a book when the places themselves are brimming with life as you stand before them. I recommend each of these places be visited but they don’t have to be all in one day! Have fun and happy traveling!

Directions: Fort Taber/Rodman: From I-195 West take Exit 15 into New Bedford. Follow John F Kennedy Memorial Highway until you need to bear right onto Rodney French Blvd. The Fort Taber/Rodman site is on the right at the end of the road.

Fort Phoenix: From I-195 West take Exit 18 into Fairhaven. Turn right to take Rt. 240 south. A little more than a mile turn right onto Bridge St. Bear right onto Rt. 6/Huttleston Ave. Turn left on Main St.; left onto Church St.; and right onto Fort St. Fort Phoenix is on the right as you approach the beach.

Ned’s Point Lighthouse: From I-195 West take Exit 19A. Turn right into Mattapoisett. Bear right onto North Street, follow for a mile and a half and turn left onto Water St. which becomes Beacon St. This road becomes Ned’s Point Rd. without any turns. Follow it to the park where the lighthouse is located.

Interesting post. Little known fact...my grandparents live about a mile from Ned's Point. I used to spend summers there and during the summer there is a little ice cream shack that has the most delicious chocolate ice cream. Bet you didn't know that did you? Oh Ned's Point, what a great little spot.