The original Woodstock music festival is widely considered to be one of the most important moments in the history of music. From August 15-18, 1969 an estimated 400,000 people crowded onto Max Yasgur’s farm in Bethel, New York. The list of musical acts that played during the festival reads like a who’s who of icons. Legends like Jimi Hendrix, Grateful Dead, Janis Joplin, Crosby, Stills, Nash, and Young, The Who, and more graced the stage enthralling the crowd.

Two years later in August 1971 former Beatle George Harrison and Indian sitarist Ravi Shankar organized the Concert for Bangladesh. Taking place in New York City’s Madison Square Garden it was a pair of benefit shows to raise money and awareness for the refugees of East Pakistan, following the Bangladesh Liberation War-related genocide. The shows were attended by 40,000 people and by 1985 the concerts and subsequent investments had raised nearly $12 million.

One year later in May 1972 those first two events collided in the dunes of Provincetown on Cape Cod. An idea was hatched for a Woodstock-type concert benefiting Bangladesh. Who organized it? Who played it? Was it a success? This is the story of Cape Cod’s Woodstock.

The roots of this event began in December 1965 with the creation of the Provincetown Academy of Living Arts. This was a nonprofit year-round arts center where students and professional artists alike could study and perform. However after two years the organization was still looking for a physical home base for operations. In 1969 they expanded their operations and began holding and sponsoring art festivals. Things came together when 20-year old Harwich resident David Blackmore pitched the idea of the day long outdoors music and arts festival to the organization in early 1972. It was to be a free event hopefully with donations from attendees going to support Bangladesh. Although there was minor resistance from locals the Cape Cod National Seashore granted the festival. Dubbed the Provincetown Music and Arts Festival it was promoted throughout New England by Blackmore, something beyond what the National Seashore had anticipated. Despite that fact Blackmore expected only between 1,000-1,500 people to show up.

The location chosen for the event was the Province Lands Amphitheater, which could seat 700, with a date of Sunday May 28, 1972. It was scheduled during one of the busiest weekends of the year, Memorial Day Weekend. It was a nearly-perfect weekend weather-wise. Not only was the event given the green light by the Cape Cod National Seashore, a section of dunes on Race Point Beach was opened up to allow concert goers who could not find accommodations a place to sleep. People, cars, motorcycles, and more lined the dunes and the streets of Provincetown. It was a far larger crowd than Blackmore had anticipated filled with hippies, Hells Angels, and more. Rumors would permeate the crowd in the time leading up to the show of potential big name acts at the event all the way up to a Beatles reunion. None of those rumors came to pass though. 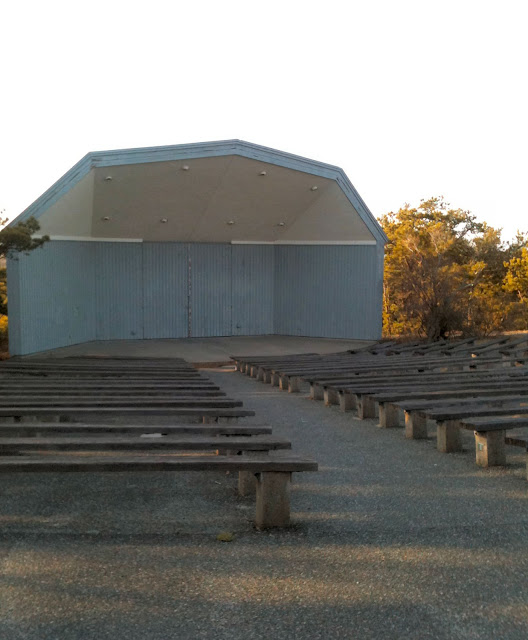 The show began at 10am on Sunday and was packed with bands from the Cape and Boston. The top performer as far as Cape Codders go was Marie Marcus, the Cape’s First Lady of Jazz. However the top performer for connections to present-day was The Daddy Warbucks Band. At the time they had toured with Rod Stewart. Two of the members of the band were Marshall Bruce Mathers and his wife Debbie, their son, born only a few months after the show, went on to become iconic rapper Eminem. The other acts on the bill were: Albatross, who played in Falmouth; Flight, a brass band from Springfield; Keith Troupe, a newly formed band in the Harwich-Chatham area; L Z Band, a blue and jazz band from Boston; and Sadbird, recently of the Groggery in Boston.

All in all somewhere between 8-12,000 people crowded in and around the Race Point Amphitheater to hear the live music and show their support. Unfortunately the large, lively crowd for the event did not translate to large donations for Bangladesh. Before the festival was over it was announced that a mere $100 had been collected from those in attendance, or roughly $1 for every 120 people. It did not stop there as in the aftermath of the show it was revealed by Provincetown Police Chief James Meades that the festival may have been more harm than good.

The large number of people on the dunes caused extensive damage. The night before many had torn up beach fencing and shingles from National Seashore buildings to burn for warmth. Drug and alcohol use ran rampant before and during the event and at one point part of the Province Lands Visitors Center’s roof was set on fire. The end result was Meades proclaiming he would go to Federal court to file and injunction if another similar festival was ever planned. In spite of all that then-Superintendent of the Cape Cod National Seashore Leslie Arnberger applauded the efforts of the Park Rangers and the members of the U.S. Park Police that had been dispatched from Washington D.C. for keeping the enormous festival relatively contained.

It was a moment in history of Cape Cod and the youth of the early 1970’s. It was an event not likely to ever be duplicated, or even allowed, on the Cape again. For one day in May 1972 Woodstock, Bangladesh, and Cape Cod culture all converged in the dunes of Provincetown.

View my previous blog posts: In Their Footsteps: Cape Cod History - The Wreck of the Montclair

In My Footsteps: Hudson, New York

Posted by Christopher Setterlund at 8:02 AM

I was there. Hard to believe that it was 50 years ago