The second installment of Travel Tuesday explores Provincetown and the secluded Wood End Lighthouse. Located at the tip of Cape Cod Wood End is one of three lighthouses in town. 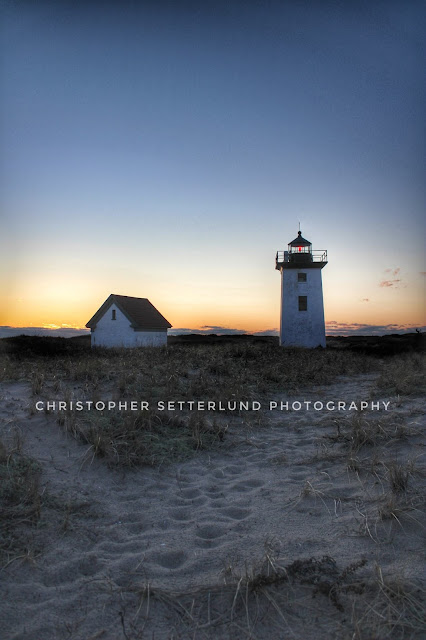 This photo is one of many taken this past week out at Wood End Lighthouse. Built in 1872 it has a twin lighthouse about two miles to the west known as Long Point Lighthouse.  Both towers are  simple rectangles and stand 39-feet tall.  This photo is a basic wide shot of the white brick lighthouse and its oil house. The photo itself is simple however it is getting to this spot that is the challenge. Parking is available at the rotary at the end of Commercial Street. The route to Wood End Lighthouse is precarious even in the best of weather. However on this day it was touch and go.

The majority of the walk out to the lighthouse is across the West End Breakwater. It was built in 1911 and stretches more than a mile across Provincetown Harbor to Long Point. Before it was built people had to travel around the harbor to get out to Long Point which at one time had a settlement and earthen fort on it. Some of those houses which existed on Long Point were floated across the harbor and dot the landscape along Commercial Street.

Though it is stable the rocks of the breakwater are of varying sizes and can be slippery naturally. They also tend to get covered in shells that seagulls drop on the rocks. It is made all the more difficult if the wind is gusting over 40mph as it was during my time out there. Once you get all the way to the end of the breakwater it is still roughly a half-mile east over the sand to get to the lighthouse itself.

The wide open space of the dunes surrounding the lighthouse make for many beautifully scenic shots besides this one. This shot is facing northeast from about one hundred feet away just before sunset. There are really no bad vantage points of Wood End Lighthouse, perhaps except for its east-facing side as the bars over its window have rusted and it looks as though the window is crying brown tears against a white facade.

Though more fun in the summer any time of year is good to take a long walk to the solitude of Wood End Lighthouse.

Find Prints of This Photo at Smug Mug: https://christophersetterlund.smugmug.com/New-England-Lighthouses/i-JR7m9fX/A

Where to go to take this photo: Pilgrims’ First Landing Park Rotary, Provincetown

Posted by Christopher Setterlund at 8:12 AM