Welcome to the first installment of something a bit different on my In My Footsteps blog. On Tuesdays I will choose a photo from my collection that is available on Smug Mug.com. I will tell the story of where it was taken, why it was taken there, and any humorous anecdotes from the shoot. It is called Travel Tuesday since unless you live at that particular spot you’d have to travel to get to it. This was originally called Photo Friday but I have something new in store for Fridays coming up. Enough of the intro here is the first photo. 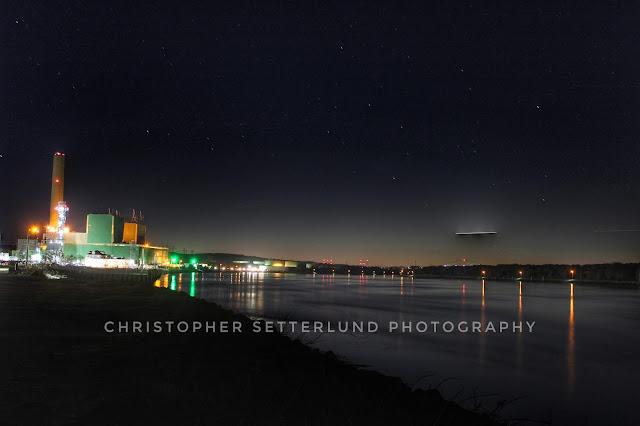 This photo was taken just last week. It is the east end of the Cape Cod Canal in the town of Sandwich. There is the Cape Cod Canal Visitors Center there open from May through October. To get from the eastern most parking lot to the breakwater at the mouth of the canal is ¼ of a mile walk. After dark it is sparsely lit which makes long exposure shooting relatively easy. This photo was taken about 500 feet from the parking lot, in between a pair of overhead lights. On the right sticking up over the treeline is the Sagamore Bridge, built in 1933, about 2 ¼ miles away. On the left in the foreground is the Canal Generating Plant about ½ mile away. This petroleum and natural gas electrical power station first opened in 1968 using coal. It was bought by the Mirant company in 1999 and was sold in March 2018 to Stonepeak Infrastructure Partners of New York for approximately $320 million.

On the walk out to the spot to shoot this photo I could hear the sound across the canal of what was likely a coyote catching its dinner along Scusset Beach. It was chilling to hear but not as bad as if it had been happening up ahead on the trail. Remember to have some sort of flashlight or head lamp with you for night shooting. It helps you see where you’re going if you’re on treacherous terrain, and also helps you avoid gifts left by dogs that their owners happily left behind.

The photo itself is a 30-second exposure and includes a plane flying by appearing as a straight line, along with green, orange, and red lights dotting the shores of the canal.

Find prints of this photo at Smug Mug: https://christophersetterlund.smugmug.com/After-Dark/i-fX663ML/A

Where to go to take this photo: Ed Moffitt Drive, Sandwich, MA

Posted by Christopher Setterlund at 7:33 PM