In My Footsteps: Finding Your Way Back To the Right Road

'It is never too late to be what you might have been.' George Eliot

That quote, those words, and the meaning behind them have stuck with me for several years. In a time of self-doubt my grandfather, the man who I model myself after, wrote that quote on a piece of paper for me. I still have it attached to a mirror I see multiple times daily. Two years after his death, and several more after he wrote it down as a way to light my path, I find myself using them once again.

The last three years were necessary. Let's just get that out of the way first. Anything I say after does not take away from the fact that if I hadn't done the things I've had to do over the last three years I have no clue where I'd be. However the end result as I prepare for a new chapter is the idea of taking a wrong turn and having to double-back to the road you're meant to be on. 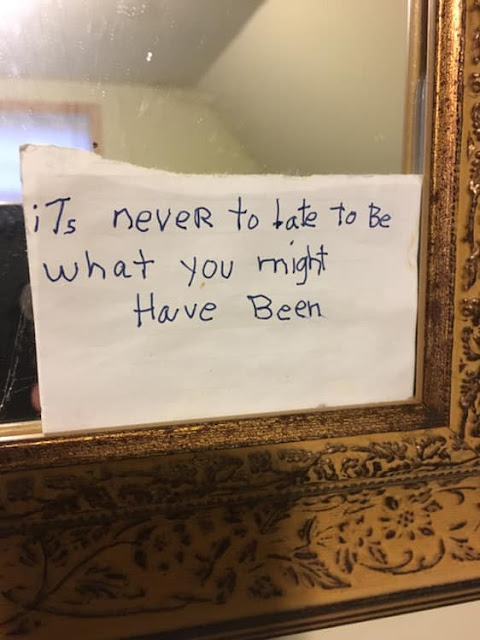 Flashback three years to early 2018. I was working in a pair of local gyms as I had worked hard to become a certified personal trainer a few years earlier. After many years of having cooked as my day job while I pushed my creative outlets, specifically writing, I felt that if I was going to have to have a day job it might as well be something I enjoyed doing. What better choice than helping people get healthy?

The problem that came with working in a gym at the beginning was the sales pressure necessary to sign new clients up. I wanted to train those who wanted to be trained, not pressure those unsure into spending money they weren't sure they had. Bottom line is a personal trainer is a luxury and I knew that and I had trouble shutting off the empath part of my brain to be the shark necessary to get people to spend their money.

In early 2018 I left one of my gym jobs to focus on the other, picking up more hours there hopefully in the process. Over the course of a few months the hours increased only slightly with my boss hanging the carrot of more paying clients equaling more hours. It was fair looking back but the sales pressure got to me. It was also at this time that I found myself running out of money. My bills and life expenses were outdrawing my income. Being stubborn and blindly faithful I believed that eventually things would turn around. In April I had reached a tipping point.

This was when I had nearly bottomed out financially. I had opened a credit card to use as a crutch but had maxed it out. This came as I was so depleted of funds in my bank account that I had days that I could not afford a protein bar and water for lunch. I wanted badly to make it work as a personal trainer but also saw a fork in the road fast approaching. So when an opportunity came I jumped.

An old friend I worked with cooking was moving to Maine. He called and asked me if I wanted to take his job cooking in a retirement home kitchen. With barely a cent to my name I happily accepted. I did not want to cook again, but I also did not want to be so stubborn that I ended up destitute. I gave my notice at the gym and told my boss there it was one hundred percent financial which it was. I left a job I was passionate about due to financial reasons only.

That being said having a good, steady income, and a relatively easy job which cooking in a retirement home is, was good for my mental health. I was smart and began saving money immediately, and also managed to keep a foot in training by snatching up a few old clients to train in-home.

However something began to happen. I began to grow accustomed to my surroundings. The more that I assimilated into the cooking routine again the harder it became to keep up on the training aspect, both clients and my own physical health. As the weeks and months passed it became harder to still call myself a trainer. It got depressing. I saw my adventure into training as a fail and here I was back doing what I had tried so hard to get away from. This is where alcohol became a big part of my life. It helped me to forget that I was not where I wanted to be. When you're unhappy inside, unhappy where you are, feeling like you're lost on a different path, you could have the greatest job ever but it won't matter.

I worked with a lot of great people at the retirement home I was at. A few of them are among the best people I ever worked with at any job. My heart though wasn't in it. I needed to begin to make my way back toward training. The plan was to leave the retirement home for another job in another retirement home at the start of 2020. The difference was that it would be fewer hours allowing me to start to acquire more in-home training clients. It sounded perfect and I made the switch in February 2020. Only a few weeks later though the Covid-19 pandemic fully struck and shut down any chances I had of in-home training for the foreseeable future.

When the pandemic first began I decided to just roll with it. I would take on a few more hours cooking and consider myself lucky that I even had a job when so many millions had lost theirs. For several months I kept my head down and my mouth shut in the name of self-preservation. This second cooking job was far different from the first though.

In the interest of being magnanimous since I no longer work there I will keep it as vague as I can. I can say that being the newest member of that kitchen I saw there was a small clique of workers that adhered to their own set of rules. There were many things I saw that went against everything I was taught in coming up in restaurants, things that frustrated and confused me. I had times I thought I was on a reality show, as there could be no way certain things were being allowed to happen. I was at a crossroads.

Things began to swing in the other direction in September 2020. It was right after Labor Day that I finally stopped my drinking that had plagued me from my waning days working in the gyms. I feel as though the alcohol kept me stagnant and accepting of the toxic environment I was living and working in. My head began to clear. I got a brilliant idea for a podcast as a creative outlet. As the days passed I also began to see more clearly that I needed to formulate my exit strategy for the retirement home job. I was again becoming accustomed to my surroundings and not in a good way. When people around you are toxic, when the job is done poorly with no repercussions, you start to drift toward that side yourself.

2021 dawned and I decided to start putting my own feet to the fire as far as getting away from cooking and filling my schedule with training, writing, and podcasting. An interview with a friend for the podcast led to a potential gig training later in the spring, while I signed up for a new certification in health to pair with being a personal trainer. I felt momentum building but still had several months to go before I could make the change. However circumstances sort of forced my hand.

Going back a little over a month from when I am writing this I had a 'final straw' type of moment. One of the higher ups in the kitchen pushed their toxic narcissistic agenda on me for the last time. There's no way someone should accept being bullied and/or spoken to like they are beneath someone else. I finally had enough of that after months of just letting it slide off my back. After that interaction I stepped back and weighed whether to stay until May or leave the job early to get away from the toxicity. I chose the latter.

In my exit interview with the general manager I vented all of my frustrations with the atmosphere of the kitchen. I summed things up by telling him it was so bad in there that I chose basically being unemployed for a couple months but being at peace mentally over staying there and getting paid but being unhappy. He understood.

I consider this new chapter as a way of betting on myself. There are no guarantees in life for success or failure. You have to try to know for sure. The pieces seem to be there. I was smart and saved money during my three years back in cooking which allows me to have a solid base under me as I take a few months between jobs. The new certification I am going to get will only make me more attractive to perspective clients for training whether in-home or in a gym. I have a new book coming out in May, my 6th overall, which lends some credibility to my name as a creator. Hopefully this leads to an increase in opportunities as a writer. Finally there is my podcast which I really enjoy working on. I have to be patient building an audience but who knows where that could lead in the coming months and years.

The key points of this entire post are as follows. Life does not give you a GPS, you might get sidetracked on your journey, and the longer you go down the wrong road the longer it will take to get back on track. You only get so many kicks at the can as far as following dreams and passions. There will be plenty of time to take a job that is safe yet mundane. Chase dreams while you're capable. Finally, always bet on yourself. Don't be reckless, but don't sell yourself short. If you don't believe in yourself why the hell would anyone else? That is what I am doing now, betting on myself. Here's to a great rest of 2021 with many brighter days ahead for me, for you, for all of us.

It is never too late to be what you might have been.