West Quoddy Head Light was the reason I decided to do travel writing in the first place.  I was always fascinated by lighthouses growing up on Cape Cod.  There was Nauset Light, Chatham Light, Nobska Light, and Race Point Light among others that were familiar to me.  As I got older I still retained my interest in these guides for passing ships.  First I began by learning more about nearby lighthouses like Three Sisters in Eastham, Wood End and Long Point Lights in Provincetown, and Wings Neck Light in Pocasset.  Then I began daydreaming about lighthouses up and down the east coast.  That is when I found Jeremy D’Entremont’s New England Lighthouse website.  It is there that I first saw West Quoddy Head in Lubec, Maine.
With its red and white striped façade it immediately captured my imagination. There was only one problem, from where I lived on Cape Cod it was an eight-hour drive to Lubec.  I was not exactly thrilled about the idea of a 16-hour round trip drive so it was necessary to find a spot to stay overnight.  That’s when I hit the jackpot.  My cousin Tracey and her ex-husband Steve had owned a cottage on the water in Owl’s Head, Maine.  It was nearly exactly halfway between me and Lubec.  It was a rental but as luck had it nobody was there for a week in October.  I was allowed to stay there for nothing, what a great deal.
Now, don’t get me wrong, I was excited for a week of traveling up and down the Maine coast.  It was going to be a tremendous experience.  However, the trip was totally based on getting to see West Quoddy Head Light.
The lighthouse itself was built in 1858 overlooking Quoddy Narrows and within eyesight of Campobello Island, a part of New Brunswick, Canada.  Lubec is the eastern most point in the United States.  It is one of the most photographed and painted lighthouses in the country.  The red stripes on West Quoddy Head come from its close proximity to Canada.  In Canada the red stripes are common to help the lighthouses stand out against the snow.  Assateague Light, located on Assateague Island in Virginia, is the only other lighthouse with similar red stripes in the U.S.  The lighthouse is now on the grounds of Quoddy Head State Park and was named to the Registry of Historic Places in 1980.
There are a few parking spots next to the lighthouse but the main parking area is located a few hundred feet away.  This is the better parking area as the lighthouse sits down a slight hill and sets a magnificent scene immediately upon your arrival.  When I said this was a popular spot to visit I meant it.  There is only one main road, Rt. 1, leading out to Lubec once you get past Ellsworth, near Bar Harbor.  I ended up behind an SUV with Texas license plates almost immediately after passing through Ellsworth.  I stopped for breakfast at a McDonalds in Machias and so did the folks from Texas.  When I arrived at West Quoddy Head an hour and a half later I was not surprised when the four people from Texas arrived shortly thereafter.  I can’t say if they came all that way just for the lighthouse, but you never know.
I was definitely in awe and very happy to be at West Quoddy Head.  I must have managed to take a photograph from every possible angle including wandering out into a nearby field.  I also shot a video of my time there as I was not sure if I’d ever have a chance to be there again.  I wanted to be able to cue up my memories anytime I felt like it.
There was a sort of guide there sharing some information.  I found out that the lighthouse was not the eastern most point in the U.S.; the guide pointed out a few large rocks out in the water technically considered to be part of the country.  Of course I shot a picture of them.  I tried hard to strike a good balance between photographing every possible inch of the grounds while also simply standing and soaking in the feeling of being there.  I try to do that at many places that I am truly excited to visit.
I began the walk back up the hill to my car and continued taking photos looking back.  I didn’t want to leave, but knew that I had a four hour drive back to my ‘home base’ in Owl’s Head.  West Quoddy Head is still tops on my list of favorite lighthouses, although there are a few I have researched that might come close.  Of course none of those are within ten hours by car, so they will have to wait.  I drove eight hours to see West Quoddy Head, anybody who lives closer needs to go check it out.  It is a beautiful and unique piece of history.  Have fun and happy traveling! 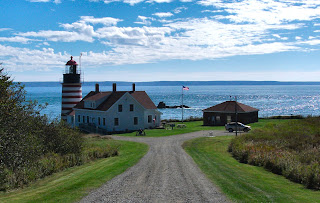 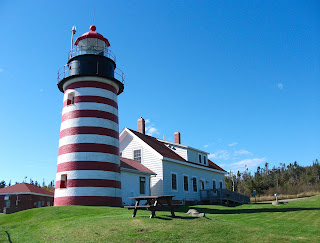 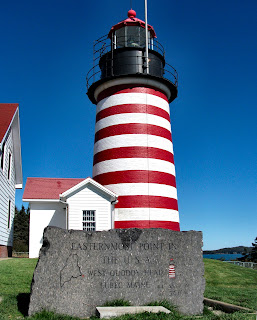 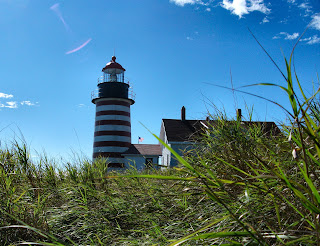 Lubec on Dwellable
Posted by Christopher Setterlund at 6:56 PM