In My Footsteps: Trip 37: Newport, RI

My visit to the amazing town of Newport will take two articles as there is so much more to see than simply the beautiful mansions. That said, the mansions themselves will be the focus of the second article; this one deals with the entirety of Newport. This article is proof that Newport stands out as one of the greatest attractions in the country. 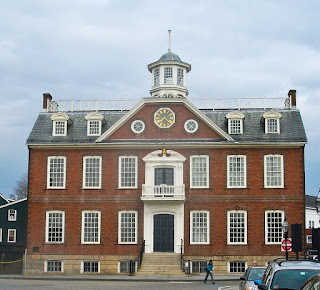 Newport is part of Aquidneck Island which is the largest island in the state of Rhode Island. The town was formed in 1639 when eight men left nearby Portsmouth due to fallout with pioneer settler Anne Hutchinson

. As part of the agreement the defectors received control of the southern part of the island which became Newport.

It became clear to me just how rich in history Newport is as soon as I took the turn from Broadway onto Washington Square. It was as if everywhere I looked there was a piece of history staring back at me. It is actually not far from the truth. There is a 250-acre section of the center of Newport that is designated as a National Historic Landmark due to its collection of pristine colonial-era homes and buildings.

I found a lot to park in and began walking. In the middle of Washington Square sits Eisenhower Park a nice shady spot near the Old Colony House(above), or Old State House. Built in 1741 it is one of the best kept public buildings from the Colonial-era. George Washington and Dwight Eisenhower

have been guests there and it now acts as a museum and part of the larger National Historic Landmark that the center of Newport is. In the midst of Eisenhower Park stands a statue of Oliver Perry, a hero during the War of 1812 who led a decisive American Naval victory over the British at Lake Erie. 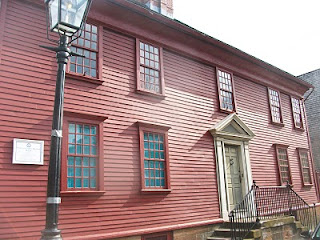 After enjoying the sites in and around Washington Square for a bit I began to tour the nearby streets. Each and every home it seemed had a plaque with a name and year adorning it; never before have I seen so many historical homes, one after another. I was amazed by the Wanton-Lyman-Hazard House(left) sitting just off of Washington Square on the corner of Broadway and Stone Street. It amazed me because of the fact that it was built in 1697 making it the oldest surviving house in Newport and one of the oldest in the entire state of Rhode Island. So old is this house that it was damaged during the riots after the imposing of the Stamp Act

of 1765 which was a result of yet another unfair British tax on the colonies. It is open for tours during June, July, and August and is a fascinating spot even if just passing by it.

The influx of wealthy people into Newport in the late-19th and early-20th centuries is not exclusive to the mansion area of Bellevue Avenue. Another example in the center of Newport is Vanderbilt Hall which is a mansion and hotel built in 1909 by Alfred Gwynne Vanderbilt and dedicated to his father, Cornelius Vanderbilt

. The Vanderbilt family came to prominence during the mid-1800’s when Cornelius oversaw the building of railroad and shipping empires. Cornelius Vanderbilt, when his fortune is adjusted for inflation into current times, had a net worth of somewhere between $143-178 billion. His mansion, The Breakers, will be covered in the second Newport article. 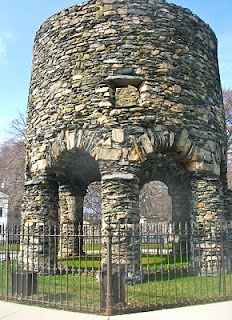 After walking along Clarke Street and Spring Street the next destination was a much simpler spot: Touro Park. The park sits between Pelham and Mill Street and is known for a spectacular piece of architecture known as the Old Stone Mill(right). Built in 1660, and similar in appearance to Dennis, Massachusetts’ Scargo Tower, this landmark’s exact historic lineage is unknown. Two popular theories have it either being built by the grandfather of the nefarious Revolutionary War traitor, Benedict Arnold

, or that it was built by early Viking visitors. However, an archaeological investigation in 1948-49 could not date any of the artifacts it studied earlier than the 17th Century. Origin aside this
structure is a stand alone site, the oldest building in Newport and pretty much a one of a kind.

The final place I visited in Newport was Fort Adams. Located across Newport Harbor with a breathtaking view of the Newport Bridge and Rose Island Lighthouse, Fort Adams(below) is still open to the public and the entire area is a State Park. 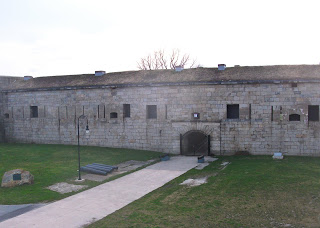 Originally built in the 1820’s this is the largest coastal fort in the United States. It has spectacular views from every side; it was magnified when I was there near sunset. It actually became a little spooky looking in through the gates that covered each entrance as the light became dim.

The Fort Adams State Park sits on land that was at one time owned by William Brenton who was governor of the Rhode Island colony from 1666-69. He called the land Hammersmith after the town in England where his family came from. In the warmer months the open grassy areas host the Newport Jazz Festival and Folk Festival. It was a great way to end a great trip to an amazing town. Newport is much more than just the storied mansions, it is rows and rows of historical homes. It is also a mysterious stone mill and a beautiful if not spooky old fort. When you have seen all of the mansions in Newport make time to view these other attractions, it adds another dimension to any Newport trip. Have fun and happy traveling!

Newport on Dwellable
Posted by Christopher Setterlund at 6:23 PM