The 6th day of my epic road trip was to be mostly the drive home.  It began in the small town of Onley, Virginia on the eastern shore.  I left the motel by 9am with one last great place to visit.  This was Assateague Island National Seashore home to loads of wild ponies.

There are signs everywhere warning visitors to stay back 40 feet from the ponies, to not feed them, or even entice them to come closer, you will get fined $100.  I parked at the beach first and took a quick look around there and some of the neighboring campground without seeing anything but seagulls.  So I drove to the park entrance which leads you about 3 1/2 miles south into the belly of the seashore.  There are several little roads leading off the main one along with off-road routes and walking/bike trails.  On my way down this road I happened upon a little brown pony grazing and stopped to get a photo of it. 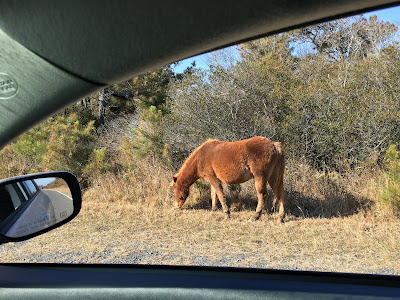 Every so often I'd come upon a car stopped in the middle of the road, knowing they saw something good.  After puttering around for nearly an hour and see 1 horse and a deer I decided to head out.  It was when I was nearly at the exit, past the ranger station, that I saw an even smaller pony grazing.  I stopped to get some photos when it began to whine.  A few seconds later a pair of larger ponies showed up meaning this was the baby.  The threesome were followed by a few more ponies and I sought safety back in my car.  I did manage a great photo of the ponies heading down the road though. 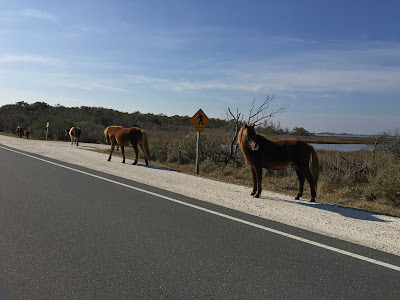 On my way back north I did have one more thing I wanted to see.  A skeletal lighthouse in Delaware.  Reedy Island Rear Range Light looks just like a lighthouse in Marblehead, Massachusetts except that it sits in a field nearly three miles west of the Delaware River.  Not wanting to tempt fate with No Trespassing signs everywhere I grabbed one photo and left, it was not too far out of my way to get there but still seemed like a little bit of a waste of time. 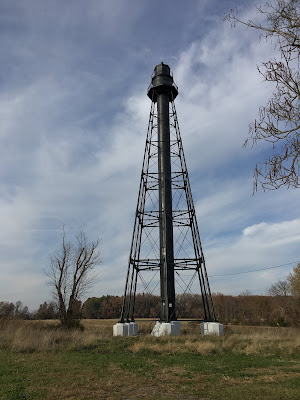 After having lunch at Panda Express, one of my favorite places although the closest one to home is about 75 miles, I started the long journey home.  Rather than just put home in the GPS I picked stopping points along the way to make the 600 mile drive seem more manageable.  I stopped at a Wawa gas station to see what it was all about before I got too far north to go to one.  I had made the mistake of not stopping at a Sheetz convenience store and wasn't going to make that mistake twice.

Piggybacking on my visit to Panda Express my next stop would be Quizno's in Orange, Connecticut.  I used to frequent the chain when the had a location in Hyannis but that closed years ago and I was never willing to drive 3 hours to the nearest one.  Of course before reaching Quiznos I had to stop at a rest stop on the New Jersey Turnpike to stretch my legs.  I managed to get a good sunset photo, although not nearly as nice as the one at Bodie Island Light the day before. 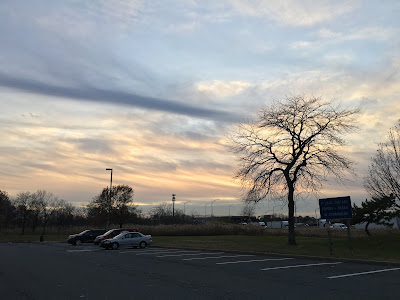 After sunset I had the obligatory getting stuck in New York City traffic, although my Waze app led me around it as best it could.  I ended up going northwest of the city and then coming down south to get to the Quiznos in CT.  That was my final stop, it was another 3 hours home from there to pull into the driveway at 11:30pm.

All in all I drove 2,100 miles through 11 states, took 1,000 photos, tons of video I need to edit, and saw many Bucket List places.  I might be tired now but am already thinking of where my next road trip adventure might take me.  Thanks for following along.  These posts have been brief but as time goes on there will be much more detailed articles about most of the towns and attractions I saw just in case anyone needs motivation to go and see them for themselves.

Posted by Christopher Setterlund at 10:26 AM