In Their Footsteps: Cape Cod History - The Man Behind the Long Point Cross


Long Point in Provincetown is a sandy spit that makes up the ‘finger’ of the arm that is the shape of Cape Cod. It was once a thriving fishing community in the 19th century. Over time as the fishing began to diminish the people and even some of the homes migrated across Provincetown Harbor to take up residence in the main part of town.

In the present day Long Point is a beautiful hike. From Commercial Street it appears so close yet so far. The reality is that in order to get to the fingertip of Cape Cod it is a nearly 2 ½ mile walk across the West End Breakwater and sandy Long Point Beach. Once out in the solitude of Long Point it is a fascinating step back in time.

Long Point Lighthouse is the centerpiece of the spit, the current tower was built in 1875 with the first lighthouse erected on the spot in 1827. The brick oil house still stands there as well. In addition to the lighthouse are a pair of earthen forts. Constructed due to fear of the Confederate Navy blockading the harbor during the Civil War the pair of forts never saw any action. They were nicknamed by the townspeople Fort Useless and Fort Ridiculous.

The final piece of interesting history that sits out on Long Point is a large wooden cross. It is not visible with the naked eye until getting relatively close to the lighthouse and forts. On it is a nameplate engraved with the name Charles S. Darby. Who was Charles Darby? Why is there a cross bearing his name located on the isolated Long Point? 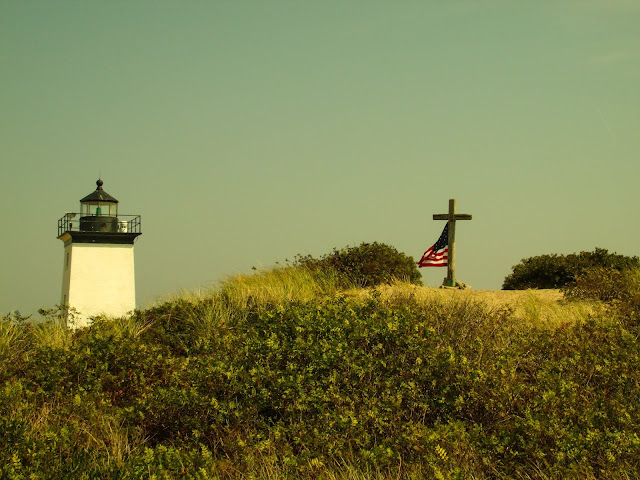 Charles S. Darby was born in Washington D.C. on February 29, 1908, one of three brothers. He studied at the Corcoran Art School. After his studies began summering in Provincetown, a noted spot for artists, along with his friend Fritz Fuglister in the late 1920’s. The friends began their time there by occupying a dune shack at Race Point for the first few summers before returning to Washington D.C. for the winter. Darby and Fuglister briefly ran the Pelican Club in D.C. at the time.

The young artists immediately began assimilating into their new surroundings. Darby and Fuglister dipped their toes into the vibrant art community studying under E. Ambrose Webster. Webster, an iconic Provincetown landscape painter, ran his Summer School of Painting on Bradford Street from 1900 until his death in 1935.
Darby became a member of the Provincetown Art Association and soon his paintings and personality made him a well known resident of the community. He was by all accounts a handsome and quite humorous man. He also became a member of The Beachcombers. The group, started in 1916, is a social and professional club specifically for painters, etchers, poets, playwrights, and others. They held popular annual parties and events of which Darby was frequently involved.

After Webster’s death Darby began using the Isaac Henry Caliga studio on Conant Street for his work. A skilled billiard and chess player Darby received exposure by advancing far in the Cape Cod Chess tournament of 1937. His greatest achievement in art would come shortly before an even greater call for his country.

In 1941 Darby moved his work from the Caliga studio to a studio on East Bradford Street. There he crafted a painting of Long Point Lighthouse that was featured in unique shows of both young and older artists put on by the Provincetown Art Association. Darby’s work received praise from visitors with one critic saying his painting ‘made the show.’ He also became an able-bodied member of the Beachcombers, giving him full voting rights on club happenings. Darby to his credit though remained humble, despite some saying he bordered on genius, he claimed to not understand what quality he possessed that attracted people to himself and his work.

In December 1941 the United States was thrust into World War II after the Pearl Harbor attacks. Charles Darby was enlisted in the Air Force and ended up training in Sioux Falls, South Dakota. He was sent to Europe in 1943. Throughout the war the local newspapers would give updates on their men overseas with Darby frequently pining over missing his adoptive home of Provincetown.

Darby helped storm the beaches at Normandy and eventually rose to the rank of Staff Sargent by 1944. He was a radio operator and member of the 435th Troop Carrier Group based in England. A transport plane he was on was shot down over the Netherlands in October 1944. Darby was able to bail out however he died a few weeks later in a hospital in Brighton, England from the burns he sustained on October 17, 1944 at the age of 36. In 1946 he would be posthumously awarded the prestigious Air Medal for his merit and valor during the war.

Provincetown mourned the loss of a beloved and talented adopted son. Those who knew him wished to honor him and sought to do so. A motion to name the intersection of Commercial Street and Bangs Street, at the Provincetown Art Association, Charles S. Darby Square was approved. The Beachcombers looked to remember their former member as well. 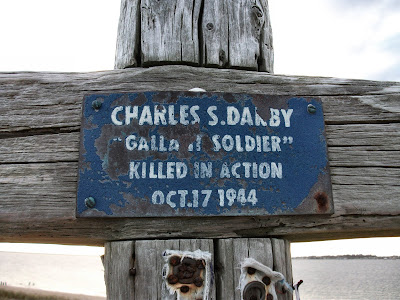 In June 1946 was decided to create a rustic 10-foot tall cross from driftwood and place it on the west side of the Provincetown Art Association. Noted bronze sculptor Bill Boogar designed a plaque which included words from Darby’s father William. The inscription read: “To Charles S. Darby, Gallant Soldier, Feb. 29, 1908 – October 17, 1944. This cross is placed in memory by his friends The Beachcombers.” It was dedicated on October 26, 1946. Famed ‘Vagabond Poet’ Harry Kemp wrote a piece dedicated to Charles Darby in October 1956 entitled The Good Fellow. 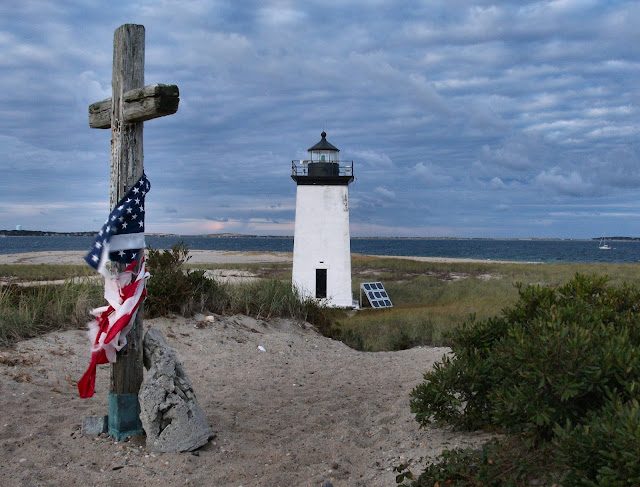 The cross remained on the grounds of the Provincetown Art Association until the summer of 1960. After the bronze plaque was stolen it was decided to move the cross to a spot far more difficult to reach and deface, the dunes near Long Point Lighthouse. The cross is adorned today with a worn American flag and a much simpler plaque: “Charles S. Darby ‘Gallant Solider’ Killed In Action October 17, 1944” An understated memorial for an understated man that managed to leave a large impact on his beloved Provincetown.

Posted by Christopher Setterlund at 12:32 PM