In My Footsteps: Sundays at Nana's

It’s a funny thing how you can still miss a person tremendously even if you had spent as much time as you possibly could with them. It’s incredible the mark someone can leave on you and your life that you can have thousands of unique memories and moments with them, a literal infinite field of flowers, and yet they still leave you thinking it was not enough. I still have so many vivid memories of my Nana, even twelve years after her death because I was around her so much.

She was a saint of a woman. All 5-feet of Portuguese and English blood who had been forced to raise four kids on her own after a cruel twist took the life of her husband at the young age of forty-three. It had to have been rough being both mother and father to kids between the ages of eight and sixteen. She did it though, all while also being the bread winner of the family. There was no stay at home parenting, no day care, no babysitting. My Nana became tough and unflappable because life gave her no other option. 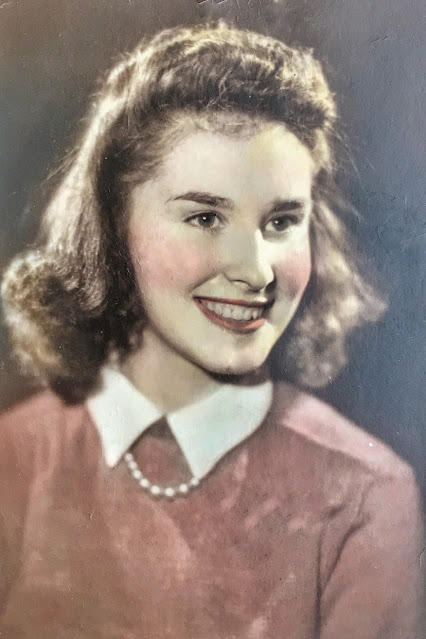 Despite everyone knowing that the family’s success or failure fell squarely on her shoulders she never lost her cool or became overwhelmed by the pressure. If she did feel any of those things she kept them hidden away from prying eyes. Being raised as a child during the Great Depression must have made persevering through life’s struggles as instinctual a trait as breathing. Crying about the hand one was dealt did not change the hand.

My Nana had to make all of the tough choices when it came to parenting. She did not have a tag team partner to bounce ideas off of. By the time she was forty-three she had lost her husband and her mother leaving very little in the way of immediate family for emotional support. She was good cop and bad cop in the name of raising well adjusted kids. She had to console grieving children who had lost their father, all the while doing her own grieving of her husband and mother in private.

These challenges of being a child during the Great Depression, college-aged during World War II, and a widowed single-mother in her forties, all shaped my Nana into the person I got to know starting in her fifties. She was fifty-three when I was born. By that point her youngest child was now twenty. Although I’d love to say that my being born allowed her to step back and let her guard down a little the truth is that it was just a coincidence. She had done her job of raising her kids and now it was time to take a breath.

I don’t have any concrete memories of my Nana until about the age of five. There are however countless photos of things before they left an imprint on my young mind. Some photos might have her head cut out by her own hand, but they all show that she was a constant presence in my life from Day One. 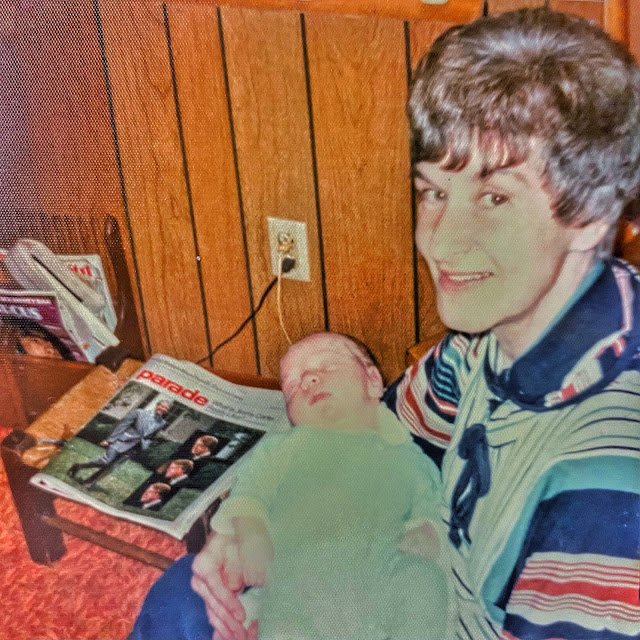 I never knew the woman named Doris. I never knew the woman lovingly referred to as ‘Ma.’ I only knew Nana. She was the person with the roaring infectious laughter that everybody who came into contact with her tried to bring to the surface. Her laugh made us laugh until tears streamed down all of our faces. It was as much a tradition as turkey on Thanksgiving and lights on the Christmas tree. Nana was the straight man in the venerable nut house that was Boxberry Lane during family gatherings.

Despite her home being ground zero for all types of gatherings throughout childhood it is Sunday that always stood out for me. In some ways Sunday is still Nana Day in my mind. Those days of visiting her began with being picked up at home, many times by Nana herself. In the early days it was a black Ford Escort (that I took my first driving lessons in), later on it was a red Dodge Dynasty.

Most Sunday’s consisted of watching television, Three Stooges and WWF All-American Wrestling stand out. If it was warm there was ample time in the backyard either playing Wiffle ball before the neighbors put up a fence in their backyard, or lying in the hammock. If it was cold or rainy we’d be inside. We’d play board games like Chutes and Ladders or going through the old family albums and getting a kick out of the different hair and clothing styles. I can still hear the crinkling sounds the protective plastic made with each turn of those old albums.

The biggest question was always what was for dinner. During the summer we’d have as many cookouts on Nana’s old red-topped charcoal grill. However Nana could make a lot of dishes. A few of her favorites to share with us were American Chop Suey, Inside-Out Ravioli, New England boiled dinner (ham or corned beef, potatoes, cabbage, carrots), and the classic franks, beans, and brown bread. If she wasn’t feeling like cooking it was pizza from Giardino’s or Taki’s, or a buffet from China Inn.

Nana was the one who loved her birds (especially Goldfinches), loved her crossword puzzles, and loved her grandkids. That was why if of one Nana’s four kids gave some good-natured ribbing about her being some sort of strict disciplinarian when they were younger we grandkids would just shake our heads in disbelief. That was not our Nana, hell I don’t think that could have been Ma, or even Doris. She was someone who always saw the good in everyone and everything. 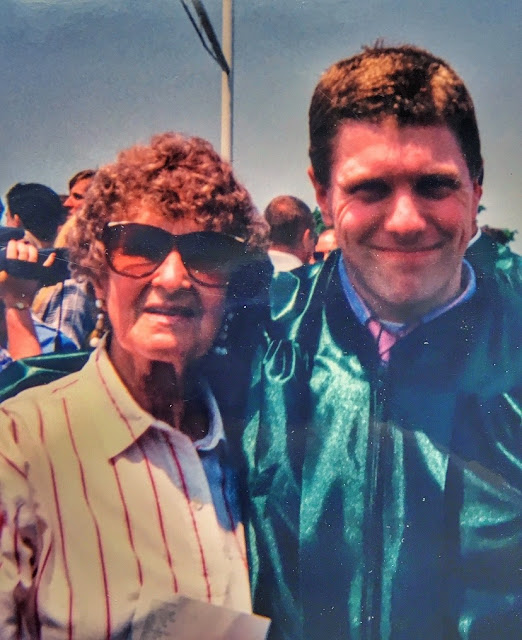 Nana was always the one who seemed truly proud of you for whatever you had done. No matter how small or insignificant it might have been her pride was evident. She was always the one who was genuinely happy to see you even as her life grew painful and her light grew dimmer. As a child and a teenager these Sundays with Nana were written in ink on the schedule of my life. An obligation not a choice, though that does not mean they were any less enjoyable. It just means that as I became a young man in my twenties with my own life and own means of transportation I made it my choice to continue the visits because I wanted to.

I can sit here now and recall literally hundreds and hundreds of Sundays with Nana. From ones that happened before my memory held on to them to the last one in November 2009 each and every one of them had special moments which, like grains of sand, fill the pristine beach that was my Nana’s life.

I was blessed to have my Nana in my life until I was thirty-two. This allowed me the ability to see her not only as my loving grandmother but also later on to be able to speak and learn from her as an adult. It allowed me to appreciate the person behind my Nana so much more. It gave me the opportunity to do things like trace her family tree back hundreds of years, or to write a children’s book based around her and her cat Mittens.

Part of me held on to the belief that as long as I had living grandparents I was still a child. Therefore I was a child until I turned forty-three. Still, as much as I’d love to have one more Sunday with my Nana it gives me peace to know that I had as many as I possibly could and likely more than most people have with their grandparents. I miss those days and can picture all of it so clearly. I miss the old phonograph in the den with the Edison record that we always wanted to play. I miss the cigarette smoke damaged painting above the fireplace. I miss the eclectic collection of glass bottles that lined the mantle. I miss sun tea and Horse’s Necks. I miss climbing up to the attic on a ladder that seemed to be one step from collapse. I miss the rose bush that swallowed a fence, or the giant puddle that formed in the street after it rained. 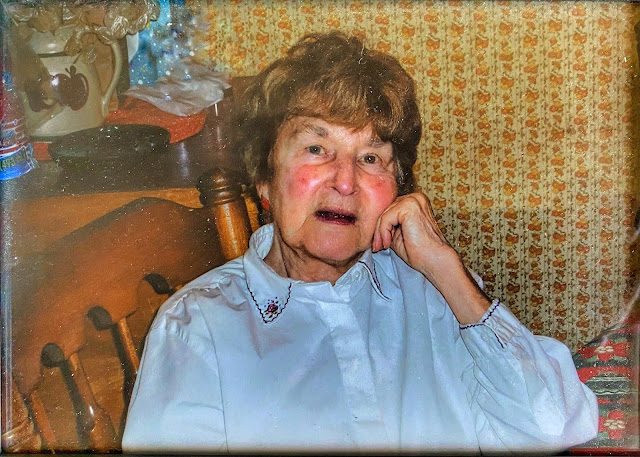 Yes I miss all of what made Sundays at Nana’s so special and fun. However there is one thing that above all else I wish I had the opportunity to relive one more time. When we would be driven home after dinner on Sundays Nana would stand in the front door and wave to us as the car drove away. I remember watching her wave and fade from sight as we pulled away. She never closed the door until long after we had vanished, like she wanted to see us for as long as she could as much as we wanted to see her. Even near the end when it was too painful to see me off at the door I could picture her sitting in her favorite chair and waving as she heard my car leave, even if she knew I couldn't see it.

I find that ending of a typical Sunday, the vision of Nana waving to us slowly growing smaller until she faded away, being a perfect metaphor for her final years. She never closed the door she simply faded away until we could not see her anymore. But if I close my eyes and think hard enough I can see her again, I can hear her again, and despite being gone for twelve years the fact that she remains such a powerful and important part of my life I believe is the greatest compliment I could pay her.