Times change. Places come and they go. Sometimes even those that stuck around for decades and left a positive impression on the community can become lost to history. This is the case with Shirdan’s Restaurant. It was a popular eatery for nearly three decades. Yet at times it can feel as though it never existed. This is a little trip down memory lane with the story of Shirdan’s Restaurant and its Country Kitchen.

Even a half a century ago the area surrounding the Barnstable Airport was one of the busiest on all of Cape Cod. Thousands of people circled the Airport Rotary daily. It seemed a fairly safe idea that any businesses that opened in that area would see some modicum of success. The greater the business, the greater the success.

From the beginning Shirdan’s Restaurant was indeed a success. It was a true partnership between Shirley and Dan Shaughnessey. The husband and wife partners opened Shirdan’s at the Airport Rotary in 1968. This restaurant venture was not a passing fancy, especially for Shirley. In fact Shirley’s parents, Margaret and Al Barabe, owned Margaret and Al’s Restaurant in the same building from 1956-1968. Shirdan’s name was a nod to Shirley’s parents’ choice of business name. Margaret also went on to work at Shirdan’s. 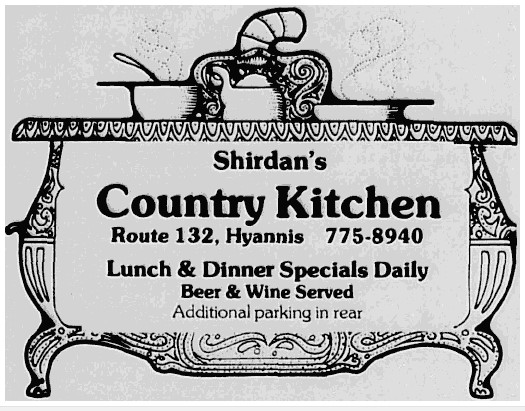 Shirdan’s Restaurant was by all accounts a classic, comfort food, New England establishment. It served breakfast, lunch, and dinner in a casual, family-friendly atmosphere. There were seafood choices like fish and chips, fried clams, and baked stuffed shrimp. In addition there were also classic comfort foods like sheppards pie, meatloaf, chicken pie, chicken croquettes, and prime rib on Friday’s.

Throughout the 1970’s Shirdan’s delighted countless customers at their Airport Rotary location. When opportunity arose to expand the Shaughnessey’s jumped on it. In March 1979 they purchased Marshview Farms Restaurant from Ed and Alice Taylor for $112,000($426,000 in 2021). The restaurant was located on a quieter stretch of Rt. 132 in Hyannis. Shirley and Dan renamed it Shirdan’s Country Kitchen and had it open in time for the summer of 1979.

The next several years saw success on two fronts for Shirley and Dan. Not only did the couple run a pair of popular restaurants but Shirley Shaughnessey also was an important figure in Hyannis town affairs. She would eventually become president of the Hyannis Chamber of Commerce during the early 1980’s.

Despite Shirley’s connections to the town there were issues that she could not overcome. Changes to the leasing agreements of the Enoch Cobb Lot of property in 1982, the area also included Mitchell’s Steak House and the VFW, had the Shaughnessey’s considering their options. Eventually the Shaughnessey’s agreed to pay a higher rent but the writing was on the wall.

While the VFW ended up purchasing their share of the property Shirdan’s went a different route. After Labor Day in 1983 Shirdan’s Restaurant was closed and the lease given up. Shirley said that she felt it would be easier to keep business under one roof. Nantucket Sound, the stereo store, moved into the spot from the Cape Cod Mall and still exists there as of 2021. All was not lost though as the Rt. 132 location was expanded. Shirdan’s Country Kitchen remained a popular destination.

In April 1985 Shirdan’s Country Kitchen was sold to John Kaye. He reassured customers that no changes would be made to the restaurant. A big change did come though when Kaye opened a second Shirdan’s in West Yarmouth on Rt. 28. For a time both locations were successful. However two problems crept up as the 1980’s turned to the 1990’s. One was the uncertainty of the seasonal nature of Cape Cod. A subpar summer could spell doom for places that depended on tourists. The second problem was the influx of larger chain restaurants.

These problems came to a head in the mid-1990’s. First the West Yarmouth location of Shirdan’s closed sometime after the summer of 1995. It was sold at auction in July 1996 and turned into a Burger King(now Dunkin’). The Rt. 132 location hung on through the summer of 1996. It was that October when John Kaye decided to close. He stated that the encroaching chain restaurants, specifically Old Country Buffet in the neighboring Festival Plaza, had eroded Shirdan’s business to the point that staying open was no longer financially feasible. Incredibly the Hyannis area was reported to be the second-most saturated restaurant market in the country at the time, trailing only Myrtle Beach, South Carolina. It made it nearly impossible for local spots at the time to thrive.

The Hyannis Shirdan’s building remained standing until 2005 when it was finally demolished. Even before then the landscape surrounding it was changing. In 1999 Bearse’s Way was expanded to cut through the former property. This paved the way for the Stop & Shop location that stands in that area.

The Airport Rotary and Rt. 132 look far different today than even during the time of Shirdan’s. Despite only being gone for a quarter-century there are times when it feels as though successful businesses like Shirdan’s have been lost to history. Both Dan and Shirley Shaughnessey have since passed away and the three former Shirdan’s locations have either been demolished or repurposed by another business. The Shirdan’s name will remain alive in the memories of those locals who sat at its tables during its nearly three decades of serving delicious comfort food to Cape Cod.

Posted by Christopher Setterlund at 1:08 PM