In My Footsteps: Trip 2: Truro, Mass.

It may be one of the smallest towns on Cape Cod, but Truro stacks up against any of the others when it comes to natural beauty and historical attractions. Located only thirty-eight miles from Hyannis, the commercial epicenter of Cape Cod, the tiny town of Truro seems to be the closest to how Cape Cod must have appeared when the first Pilgrims set foot on it nearly 400 years ago. Probably known to some simply as the gateway to Provincetown, Truro is relatively unknown to the average traveler. For anybody seeking a real taste of the unchanged natural beauty of Old Cape Cod, take an afternoon or a whole day and drive up to Truro. 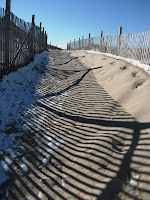 Once you get past Wellfleet Center on Route 6, the Cape’s main highway, you will begin to notice just wide open the Outer Cape really is. Established in 1709, Truro is home to many beautiful beaches both on the eastern, Atlantic Ocean, side and the western, Cape Cod Bay, side. The first stop was Ryder Beach(right), a nicely secluded stretch of beach nestled ten minutes from Route 6 on the bay side. Taking a right onto Prince Valley Road will get you there. Though there are several lavish homes in the area surrounding the parking lot, Ryder Beach has a very cozy feel. Perhaps it is due to the fact that it is tucked away down several rural roads and is therefore not easily found. There is extensive erosion control going on at Ryder Beach so be aware of the signs. Otherwise, enjoy the breathtaking views. On a clear day you can see the shoreline from nearby Provincetown all the way out across Cape Cod Bay toward Plymouth and the South Shore.

After leaving Ryder Beach the next area I visited was Pamet Harbor, the birthplace of the American Whaling industry. Named for the tribe of Indians that inhabited the land there was barely a boat to be found in Pamet Harbor during the dead of winter, although the harbor was bustling with activity. At the mouth of the Pamet River a jetty heavily damaged by a recent storm was being rebuilt. The sounds of gigantic boulders being carried and deposited only a few hundred yards away echoed throughout the clear, calm January air. Truro’s harbor houses some amazing scenery which would be appreciated more in the warmer months. Also the Pamet Harbor Yacht & Tennis Club, located adjacent to the harbor, should be visited during a trip to Truro as well.

Next up was another out of the way beach, Ballston Beach. A quick journey across Route 6 via an underpass to the ocean side of Truro leads you to yet another beautiful scenic view. Situated near the end of North Pamet Road, Ballston Beach itself is small; the sandy pathway to the beach was off limits due to an open trench caused by a recent storm. Slightly to the north sit a pair of homes sitting majestically atop a pair of high hills. On this particular day, where the snow was still covering most of the ground, the hills looked like mountains ripe for skiing or sledding(left). 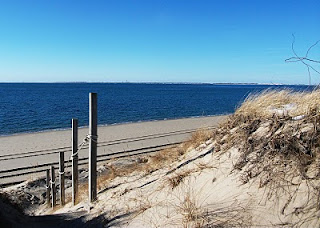 Back across Route 6 sits Corn Hill and Corn Hill Beach. Corn Hill Beach(right), conveniently located on Corn Hill Road, runs out to the mouth of the Pamet River which contains a different view of Pamet Harbor. If an overnight stay is desired the Roseville at Corn Hill cottages are located directly across the street from the beach. With all of the amazing views nearby it is almost recommended. Corn Hill’s name is taken from a group of sixteen pilgrims, led by Miles Standish, who discovered the precious Indian corn on that spot in 1620. Also of note, Ralph Barnaby became the first to exceed Orville Wright’s American record for motorless flight at Corn Hill. In 1929 Barnaby flew for 15 minutes, 8 seconds, breaking the Wright record of 9 minutes, 45 seconds set in 1911. Markers on the edge of the parking lot at Corn Hill Beach designate these events. Following Corn Hill Road to the top leads to a scenic overlook of not only the coastline, but also a marshy area below inhabited by blue herons. 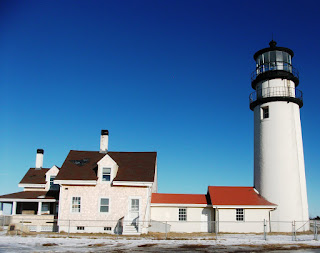 Before leaving Truro, I had to see the most popular attraction, that being Cape Cod Highland Light. Highland Light(left), which is surrounded by the Highland Links Golf Course, is the oldest lighthouse on Cape Cod; the current tower was finished in 1857. It was moved back 453 feet from the eroding cliffs in 1996 to save it from possible collapse. Looking to the south one can see several structures which lay on the grounds of the defunct North Truro Air Force Station. Though it is no longer operational, it is considered government property and therefore cannot be explored. The lighthouse, however, can be climbed from mid-May to mid-October.

After visiting Truro it amazes me that more people have not discovered this scenic jewel of Cape Cod. Take my advice and make it a point to visit not just the places noted here, but others such as Pilgrim Heights that I did not have the time to see. Have fun and happy traveling!

Truro on Dwellable
Posted by Christopher Setterlund at 1:26 PM