In My Footsteps: Trip 3: Dennis, Mass.


Located in the Mid-Cape area, Dennis has many well known attractions. The beaches are famous: West Dennis, Corporation, and Chapin to name a few. There are numerous historical landmarks including Scargo Tower. As in my other travel blogs I am trying to find places not as easily found on any vacation guide.


The journey begins quite aptly on historic Route 6A. Also known as Old King’s Highway, Route 6A was the most used roadway on Cape Cod before Route 28 and the Mid-Cape highway came around. Thought to have begun as an Indian trail from Plymouth to Provincetown, it became part of Plymouth’s ‘King’s Highway’ in the late 17th Century. 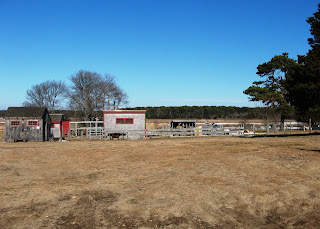 A drive along this road is a rich tapestry of historical homes and monuments. So protective of the history on Route 6A is the Cape that even changing the color of ones home is subject for intense debate at town meetings. This road in and of itself is a worthwhile adventure, complete with large oak trees hovering over the road and old horse hitching posts located just off of the sidewalk.

One of the first places to see is a spot that is technically in neighboring Yarmouth by about 1,000 feet. That would be Bray Farm(right). Established in 1639, this small farm is open to the public year round. Even on a sunny January day like today one can park and walk the grounds and see the animals roaming. From the requisite sheep, goats, and chickens, to donkeys, bees, and the oddly beautiful Scottish cattle, Bray Farm will thrill children and adults alike. The owners are very friendly and will gladly answer any questions you may have. There is even a boardwalk along the back end of the property with a spectacular view facing toward Grey’s Beach in Yarmouth. 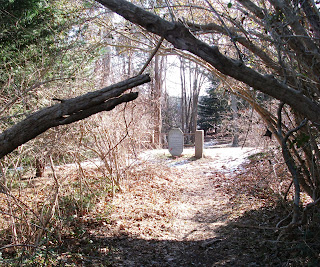 A little further down Route 6A, just across the street from Osprey Lane is another piece of Cape Cod history. Through a natural tunnel of trees sits the burial ground of the Nobscussett tribe of Indians which lived in Dennis hundreds of years ago(left). The grounds are fenced in and marked by a stone stating that the chief of the tribe was named ‘Mashantampaine.’ Also the site holds a great view of Scargo Lake at the back end of the burial ground, but there are many other spots with better access to the lake.

One of those spots is a conservation area in close proximity to Scargo Tower, named Scargo Park. The tower and park are named for the legendary Nobscussett Indian Princess Scargo who was so beautiful that legend has it other Indian warriors would come from all parts of Cape Cod just to see her and bring gifts to help sustain her people.

Dennis, like much of Cape Cod, has numerous conservation areas great for hiking and animal watching. Scargo Park is a hidden gem down a windy dirt road just off of Scargo Hill Road. With an elevated view of Scargo Lake, along with swings for children and a sheltered picnic area, this conservation area is a worthwhile stop for any visitor. 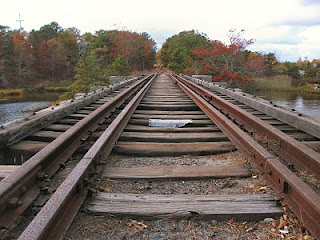 Old Bass River Road, another historical drive, leads you to another great conservation area called Indian Lands. Located next to the Dennis Town Offices, the Indian Lands conservation area is actually closer to three areas in one. There is a set of paths which lead down toward Bass River with a great view of the Highbank Bridge. The master path runs along the power lines and is a tougher hike with soft sand and stones mixed together. The other pathway is a set of defunct railroad tracks(left) almost totally overgrown with small trees and plants. Follow these and you will come to a bridge crossing over Bass River with a view of the rushing highway traffic rushing by on the right. 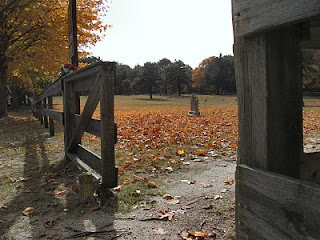 Not to be missed in the same parking area as the Indian Lands and the Dennis Town Offices is another piece of history. Called either Old South Dennis Cemetery or Dennis Ancient Cemetery(right), it lies behind the Town Offices in a fenced in area but is accessible. The graves contain some of the last names most associated with Cape Cod. Names like Baker, Bangs, and Nickerson fill many of the plots.

There is nothing against all of the great beaches and other historical sites that Dennis has to offer. They should all be visited as well. Once those have all been seen, or if you are trying to see the Cape Cod that locals know, check out the places mentioned above. You won’t be disappointed. Have fun and happy traveling!

Directions: Bray Farm: from Rt. 6A turn on Bray Farm Road and follow it to the end.

Nobscussett Indian Burial Grounds: from Rt. 6A, turn left on Osprey Lane, located less than ½ mi. east of the Red Pheasant Inn. Grounds are directly across the street, but parking is difficult, may be better off walking to this spot from elsewhere.

Scargo Park: from Rt. 6A, turn onto Old Bass River Road. Take left onto Scargo Hill Road. Scargo Tower is designated by a big sign; Scargo Park is the second left after the tower.

Dennis Town Offices: from Rt. 6A, turn onto Old Bass River Road, follow it approximately four miles. The town offices are designated by a green sign on the right side. There is access to both the Indian Trails and the Dennis Ancient Cemetery from the parking lot.

The Legend of Princess Scargo

South Dennis on Dwellable
Posted by Christopher Setterlund at 9:39 PM